In August of 2017 I went with my boyfriend to Sicily, in the south of Italy. We stayed in Catania, visited Palermo and did skydiving in Siracusa. An amazing experience! Another thing from my bucket list 🙂

Mount Etna is an active volcano. It lies above the convergent plate margin between the African Plate and the Eurasian Plate. It is currently 3,329 m high. Mount Etna is one of the most active volcanoes in the world and is in an almost constant state of activity. The fertile volcanic soils support extensive agriculture, with vineyards and orchards spread across the lower slopes of the mountain. 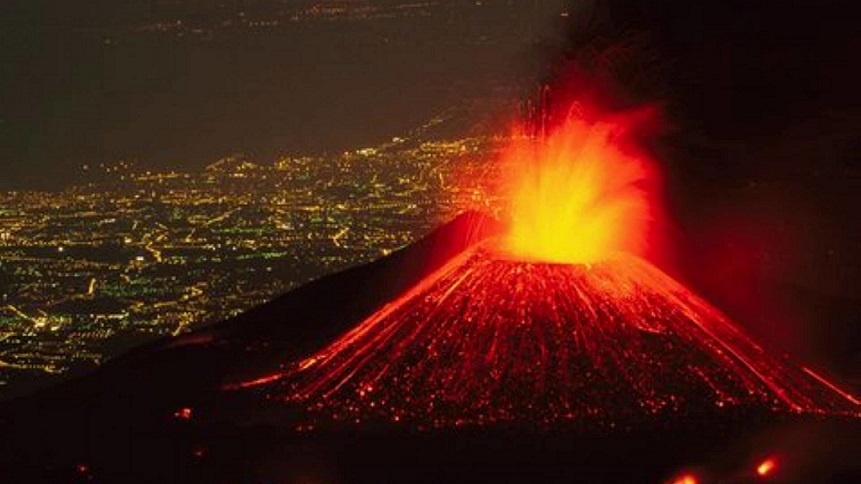 In August I went with Alejandro to Sicily, in Italy. We live in Malta now and we haven’t had visited the south of Italy, here so close! The flight takes about 20, 30 minutes. We stayed there in Catania for 4 days.

The city is a bit dirty and the south of Italy seems like a place that stopped in the 90’s – the people, the publicity and advertisements in the shops, the food… everything had a vibe of my childhood memories. What I didn’t like is that no one speaks English, they are terrible with that! 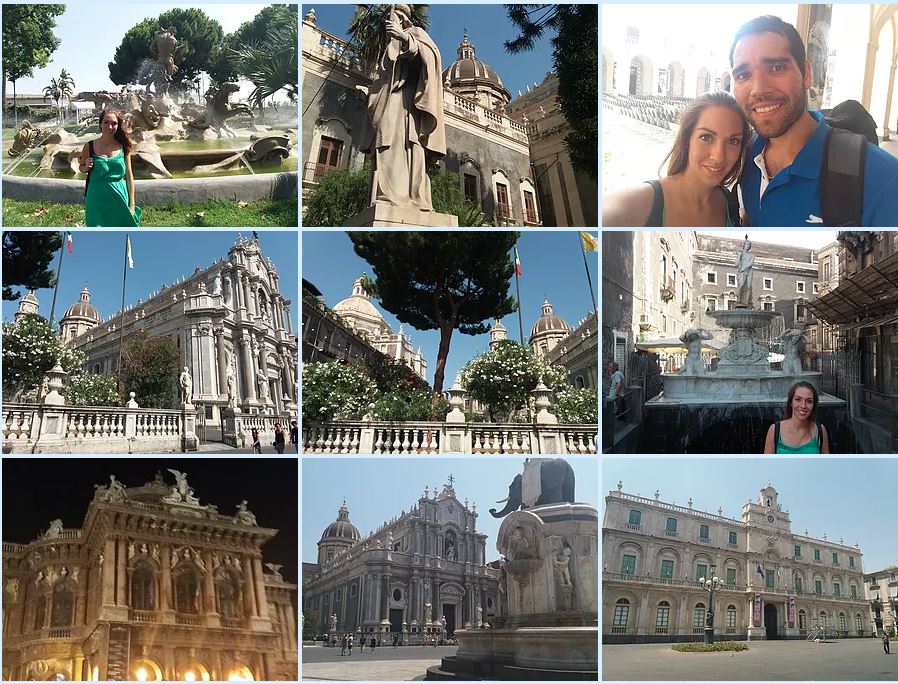 The apartment that we rented was amazing! It’s called Appartamento Giada, located in Via Reitano 60, 95121 Catania. I really recommend it. It’s really close to the main square and it was cheap. It had two floors, with the room upstairs.

We spent an amazing time there, listening to music on the radio, watching Friends on TV, drinking this strong beer that they have there called Biere du Demon with 12% of alcohol, chatting, dancing on the couch, kissing… This trip brought us even closer as a couple, it made me fall in love with him even more 🙂

In Catania we went for long walks, we played air hockey in a bar, we went to buy makeup and new shoes in Via Etnea, a big commercial street. Then, we rode an old carousel in Giardino Bellini. This garden is the oldest urban park in Catania and it was  inaugurated in 1883.

We visited the main square Piazza Duomo, where we ate cannoli and we saw the fish market located close by. In the center of the Piazza is a fountain dating from 1736, named Fontana dell’Elefant, with an elephant that is the symbol of Catania.

We also visited the ruins of an old Roman Theater. It was built around the 2nd century AD and brought to the light during the excavations in 1904 and 1906. Unfortunately only part of it is visible today, because other part is still buried under lava bridge or stones were removed in order to reconstruct other buildings. We didn’t go to the Mount Etna because it was too expensive.

The Capuchin Catacombs in Palermo provide a macabre tourist attraction as well as an extraordinary historical record. There lies the mummy of Rosalia Lombardo, an Italian child who died in 1920 of pneumonia. Her body was one of the last to be admitted to the catacombs and is one of the best preserved bodies in the world. 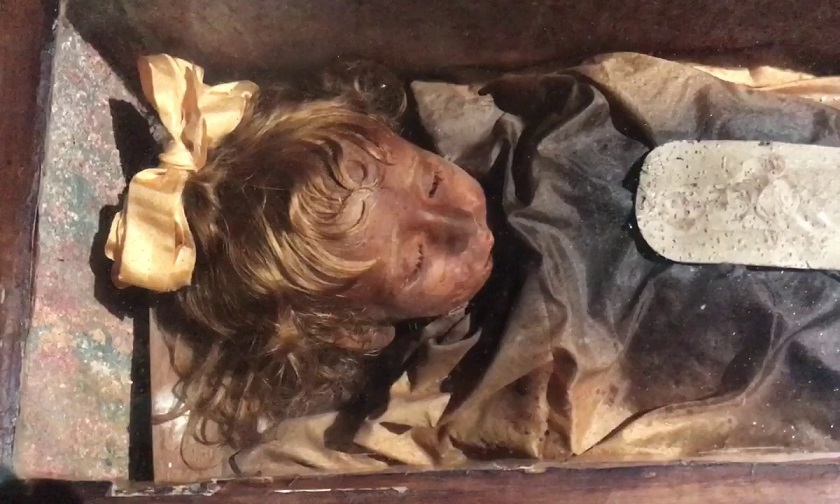 In our second day in Sicily we went by train to the other extreme of the island – Palermo. It took us about 4 hours to get there but it was worth it. I liked Palermo much more than Catania. Palermo has this natural charm. We went to eat in a sushi restaurant when we got there and then we went to explore the city.

I loved a gigantic fountain called Fontana Pretoria, with lots of beautiful statues and surrounded by palaces and interesting old buildings. The fountain was built by Francesco Camilliani in the city of Florence in 1554, but was then transferred to Palermo in 1574. In order to transport it, the fountain was disassembled in 644 pieces. Then, in order to make room for the fountain, several buildings were demolished. However, not all the pieces arrived in Palermo. Some sculptures were damaged during the transport others were stolen. The fountain represents the Twelve Olympians, other mythological figures, animals and the rivers of Palermo. 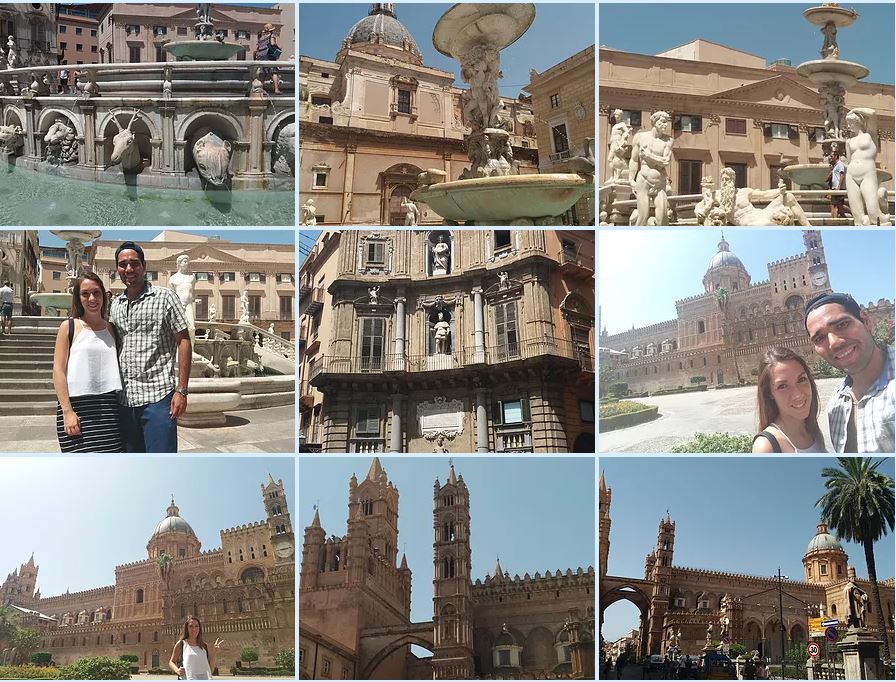 Another thing I really liked to visit was the Palermo Cathedral. Very impressive the architecture! It is dedicated to the Assumption of the Virgin Mary. As an architectural complex, it is characterized by the presence of different styles, due to a long history of additions, alterations and restorations, the last of which occurred in the 18th century. It was erected in 1185 by Walter Ophamil, the Anglo-Norman archbishop of Palermo and King William II’s minister.

We ate ice cream, strolled around the commercial streets and saw some street artists performing in Quattro Canti, officially known as Piazza Vigliena. The piazza is octagonal, four sides being the streets; the remaining four sides are Baroque buildings, the near-identical facades of which contain fountains with statues of the four seasons, the four Spanish kings of Sicily, and of the patronesses of Palermo, (Christina, Ninfa, Olivia and Agata). It was a very fun day.

In our last day we went to Siracusa. We didn’t have time to visit anything in the city. We just took a taxi and went to Skydive Sicilia to do something totally crazy – skydive!! 😀 It was super super hot! First we went inside a shelter where the crew explained us the basic stuff and prepared the equipment. Then, we entered a small plane.

It was cool that me and Alejandro jumped from the same plane, at the same time, more or less! It was just me and him with the crew. My instructor was Italian and very nice. We payed an extra so that the guys could take pictures and film us while we jumped.

It was very scary to see when they opened the door of the plane and the crew jumped. Everything seems so small from up there! First Alejandro jumped and then I jumped. It was amazing! The first few seconds you panic because it’s a free fall of 4.500 meters at 220km/h. We feel so much wind in our face that we cannot even breath. Also, you feel like you want to grab on to something but you can’t.

Then they open the mini parachute and the speed goes down a bit. Finally, they open the big one and you just stay there, flying in the air, enjoying the amazing view from above. Very beautiful! I felt like a bird. The landing was very smooth too, much more than what I was expecting.

After the jump we had to call a taxi because our flight was right next. I totally recommend this experience. I was very proud of myself for not being scared 🙂

There was an error retrieving images from Instagram. An attempt will be remade in a few minutes.