In the summer of 2014 I went to two Belgium cities: Bruges and Brussels. Without a doubt I preferred Bruges, a medieval town very charming and beautiful. It reminded me of fairy tales and great love stories!

The history of the swans dates back to the middle ages. People from Bruges were unhappy with Emperor Maximilian of Austria and his adviser Pieter Lanckhals. The two were captured and Lanckhals was executed in front of Maximilian. He escaped and punished the people from Bruges decreeing that they would have to keep swans on the canals and lakes forever to remember what they did. Swans have long necks, which in Dutch means lanckhals, the last name of his executed adviser. 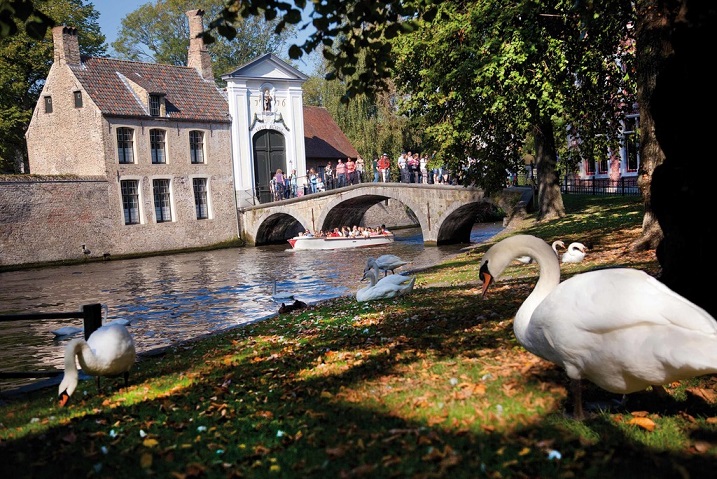 I loved Bruges! It is undoubtedly on my top favorite cute places in Europe. Bruges is an old medieval town, full of cute waterways. Ricardo and I stayed at the Hostel Bruges Inn Center (now called Hostel 28) on Dweersstraat 28. We paid €104 for two nights, so €26 a night each.

I loved the Burg or Markt, which is the main square of the city, which also has the Town Hall and the Belfry. In the center of the market stands the statue of Jan Breydel and Pieter de Coninck.

The Belfry is a medieval bell tower and one of the city’s most prominent symbols. A narrow, steep staircase of 366 steps leads to the top of the 83 m high building. The building is a central feature of the 2008 film In Bruges and is also mentioned in the novel Cloud Atlas. 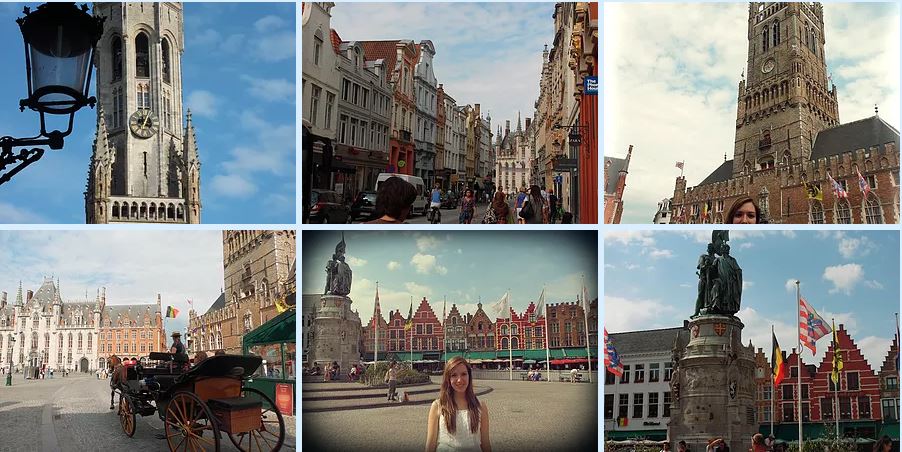 I loved the other square where there is the Basilica of the Sacred Blood. Originally built in the 12th century as the chapel of the residence of the Count of Flanders, the church houses a venerated relic of the Holy Blood of Christ.

I really liked the area of Beginhof, which is a collection of houses surrounded by beautiful water channels with ducklings. The entrance bridge is from 1776. The beguinage used to be like a small city. The women had everything they needed in there, such as plantations and church. The place had its own rules, the women living in there were protected within the beguinage in case they committed anything illegal outside of its walls. 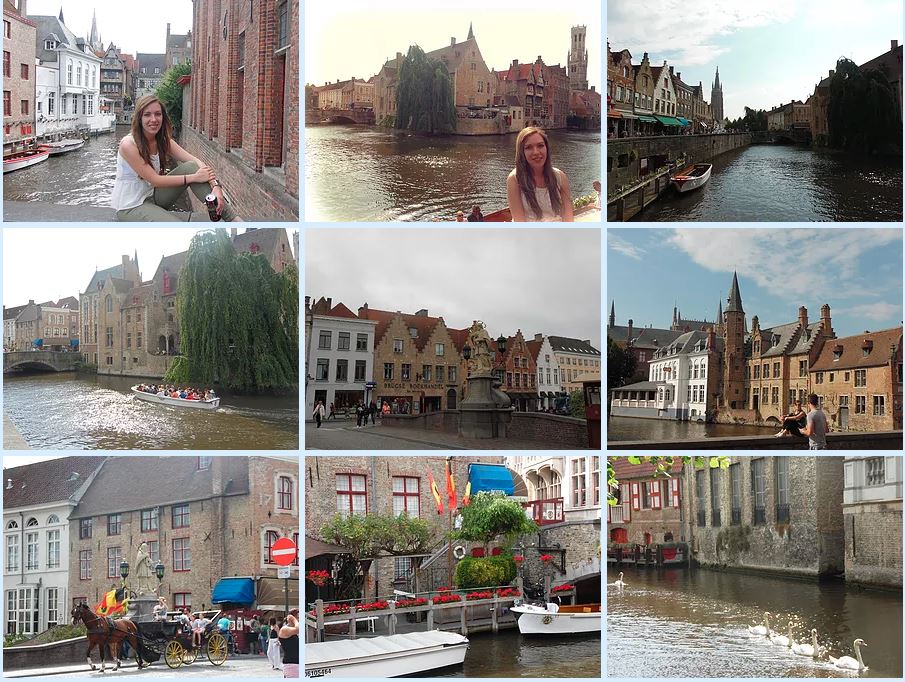 The Onze Lieve Vrowekerk (Church of our Lady) is also beautiful. I took pictures of a bridge with this church in the background that look amazing. Its tower, at 115 m, remains the tallest structure in the city and the second tallest brickwork tower in the world. 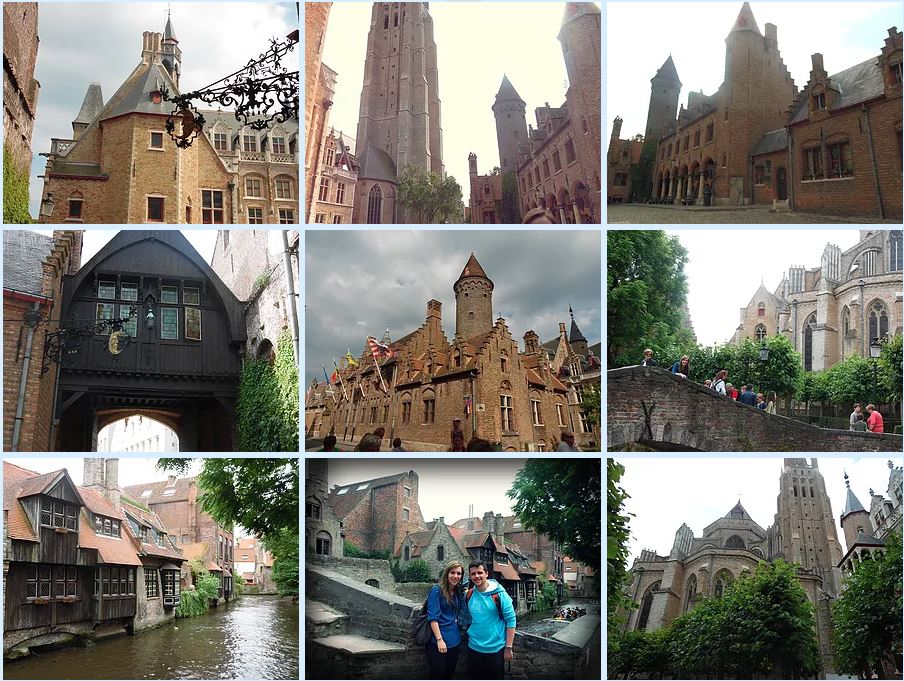 I enjoyed the walks we did to the Jan Van Eyck Square area. Here we had dinner at an Italian restaurant and also went to some bars to drink some typical Belgian beers, with red fruits. The square is named for noted Northern Renaissance painter Jan van Eyck.

In Simon Stevin Square we also drank some beers. As we went there during the World Cup 2014 games, we went to a square to watch the game Belgium vs. Germany and it was crazy. We ordered the most expensive beers, all fancy, and then we ran away without paying in the middle of the crowd.

We then saw the second part of the game for some sort of giant outdoor pavilion with giant screens. Belgium lost and was eliminated but even so it was super fun. Another typical thing we did there was eating chips with a special sauce. And waffles, of course.

I loved the fact that we rented bicycles and rode all over the city like that, past all the canals, parks, lakes and picturesque mills.

The city is home to 40,000 EU employees, 4,000 NATO employees and hosts about 300 permanent representations: lobby groups, embassies and press corporations.

Many walls on houses in Brussels are covered with comic book references – so look up when you walk the city.

After Bruges, we went to Brussels for two days. The trains in Belgium are really modern, with two floors and everything. I liked Bruges much more than Brussels. We were not lucky in Brussels because it was raining a lot. In addition, in Brussels, Ricardo and I had some fights. The city is nothing special. We stayed at Hotel Sabina. We paid € 47 for one night in a double room, so we paid €23.50 each. It is on Rue du Nord 78.

I liked the Grand-Place, with its nice buildings. We had dinner in a Greek restaurant close to this square.

This is the central square of Brussels. It is surrounded by opulent guildhalls and two larger edifices, the city’s Town Hall, and the King’s House or Breadhouse, a building containing the Museum of the City of Brussels.  The square is the most memorable landmark in Brussels. It is also considered as one of the most beautiful squares in Europe, and it is a UNESCO World Heritage Site since 1998.

We visited the Manneken Pis. This is a landmark small bronze sculpture with 61 cm, depicting a naked little boy urinating into a fountain’s basin. It was designed by Hiëronymus Duquesnoy and put in place in 1618. The statue embodies the sense of humour of people from Brussels and their independence of mind.

We visited the church of Notre Dame du Sablon. Close to the church, there’s the Petit Sablon square and garden, very beautiful decorated with some nice statues.

In this trip we also went to the Palais Royal, which is the official palace of the King and Queen of the Belgians. However it is not used as a royal residence, as the king and his family live in the Royal Palace of Laeken on the outskirts of Brussels. The palace is situated in front of Parc de Bruxelles.

Close to the Royal Palace, you have the Saint Jacques-sur-Coudenberg church. In front of this church, you have Mont des Arts. I really liked Mont des Arts. We sat there watching the sunset, with the silhouette at the bottom of the buildings of the Grand-Place.

To give the area, situated between the Royal Palace and the Grand Place, a better look during the Universal Exposition held in Brussels in 1910, the king ordered the landscape architect Pierre Vacherot to design a ‘temporary’ garden on the hill. The Mont des Arts offers one of Brussels’ finest views.

The European Parliament has three places of work – Brussels (Belgium), the city of Luxembourg (Luxembourg) and Strasbourg (France). Luxembourg is home to the administrative offices (the “General Secretariat”). Meetings of the whole Parliament (“plenary sessions”) take place in Strasbourg and in Brussels. Committee meetings are held in Brussels.

This cat hammock was my favorite project so far! It took a lot of work to make it, but I loved the end result! Initially I made it for my 🐈 Pinky, but he didn’t like it as much as I did 🤷‍♀️ he got scared every time the hammock moved. I eventually sold it to someone, and they told me that their cat loved it, so mission accomplished anyways! 💪
Today I made this macrame phone bag📱Very practical when you just want to take your phone with you.
Some months ago my dear friend @soraya_meyer_artwork asked me why I never tried to do macrame necklaces, as they are easier to make and also easier to sell. Back then I told her it was not my thing.
I created this wall hanging months ago. This was the first time I mixed different colors in the same piece. Actually, it was the first time I used colors AT ALL, apart from the typical beige. Green was my first choice bcs it is my favorite color, the color of nature 🍃
This macrame 📸 frame is a different type of wall hanging and proves that macrame art can be very versatile! For this one I chose to use a drawing created by my dear friend @soraya_meyer_artwork ❤️
I placed this wall hanging in my meditation corner and it is very special to me because it has 7 crystals that represent the 7 chakras: ⚪️ the Crown Chakra (I understand) 🟣 the 3rd Eye Chakra (I see) 🔵 the Throat Chakra (I speak) 🟢 the Heart Chakra (I love) 🟡 the Solar Plexus Chakra (I do) 🟠 the Sacral Chakra (I feel) and 🔴 the Root Chakra (I am) 🧘‍♀️